Chile Libre de Tabaco and its website have been nominated for the Global Health Council Excellence in Media Award, in the Community category.

Feb 1, 2011 — Timothy Frasca, a journalist/AIDS researcher who worked closely with Chile Libre de Tabaco/Fundación EPES on many health promotion projects throughout the 1990s, has informed us that he has nominated our website for the Global Health Council. Excellence in Media Award. Frasca  now lives in New york City, where he conducts research at the  HIV Center for Clinical and Behavioral Studies. ¡Muchisimas gracias, amigo!

In the intervening years, new health issues have arisen and new channels for empowerment and mobilization have been created, including the Internet. In Chile, the most “wired” country in Latin America, Fundación EPES is using the Chile Libre de Tabaco website to support advocacy for a ban on indoor smoking in public places. In the process, it is exploring and expanding the power of information-sharing to create community, generate alliances and mobilize public opinion for better public health policies.

“Chile has one of the highest smoking prevalence rates in the Americas and the world,” Frasca writes.” Chile Libre de Tabaco, a small team of health educators and promoters, is working to change that by using public information as an advocacy tool to raise awareness and promote legislation to make public places 100% smokefree.

“The new site and its related Facebook page have been essential to the success of lobbying efforts to introduce draft legislation for 100% smokefree areas,” Frasca writes.

“Debate of the law should commence in March, once Congress resumes its 2011 sessions. The Ministry of Health has promised to label the bill urgencia simple, a designation that moves it to the top of the legislative agenda.

“Recent studies indicate that Chile is not turning the tide on smoking. The January 2011 National Health Survey showed that half of all young adults smoke in the country and that the overall smoking rate remains above 40%, among the highest in the Americas. Although Chile was the first country in South America to modernize its tobacco control legislation after ratifying the Framework Convention on Tobacco Control, the tobacco industry calls the country’s laws ‘reasonable’–a bad sign. The industry is quite happy with the way Chile has responded to pressures to reduce smoking,” Frasca writes.

One major omission was the failure to legislate for 100% smokefree environments in restaurants, bars and other public places. Current legislation regulating second-hand smoke in closed public space is optional, partial, hard to monitor and ineffective.

The Chile Libre de Tabaco website has made 100% smokefree environments in restaurants, bars and other public places its top priority.  It is “an effective advocacy tool and a reliable information source with high media visibility,” Frasca writes.

“Its information materials are cited, and it has developed good access to legislators and health officials; and it works closely with major medical associations, the University of Chile Medical School and the Pan American Health Association’s Chile office. It has also created a diverse base of organizations to advocate 100% smokefree legislation and to publicly challenge the industry. Only six months ago, civil society appeared uninformed and weak. But thanks in many ways to Chile Libre de Tabaco and its website, this is changing.”

As former health minister Dr. Jorge Jimenez wrote recently in his blog Fuertes contra el tabaco ”the community is now organized, coalitions are in action, journalists are sensitized, authorities have been convinced and politicians are in solidarity with health. The moment must not be lost.”

The work of Chile Libre de Tabaco is rooted in nearly three decades of health promotion carried out by Fundación EPES, a grassroots health advocacy group working since 1982 in the working-class neighborhoods of Santiago and Concepción, Chile’s second-biggest city.

EPES is “a recognized world leader in the community-based approach to preventive health” Frasca writes.  EPES’ work in rebuilding shattered lives after last year’s earthquake in southern Chile was featured on the cover of the Fall 2010 Harvard Public Health Review.

The winner of the Excellence in Media Award will be announced at the Global Health Council annual conference in mid June 2011. 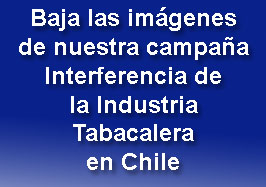